It needs some good hours on a plane, across the Atlantic Ocean and most of the “stars and stripes” country, to get to where today’s character is living his “soccer road”. We land in the south of the United States of America… Welcome to New Mexico !!!

Andrea Fringuelli: born in Perugia, 17 years old, student at his 4th year of high school with a great passion for soccer since the childhood, tells SocceRoad his story.

“My father Bruno passed on to me this beautiful passion and also the one for my favourite team: Juventus! It all started when I was 6 years old with the team of my neighbourhood, San Sisto (Perugia), and 4 years later went on with Perugia Calcio, where I remember very positive and exciting seasons before going back to play for San Sisto “.

Then the decision to make a different experience…

“Yes! I decided to live a year away from Italy, but not from soccer! So I took on this great adventure as an Exchange Student in New Mexico. My older brother did it before me 5 years ago and it was thanks to his stories that I finally convinced myself to do it as well!”.

Exchange Student is a project that allows students to spend short or long periods in a school abroad (U.S.A. among the main destinations), living the local reality and fully integrating into the community.

Unlike the classic cultural exchange, Italian families have no obligation to reciprocate the hosting and the students can’t choose the location or the school to attend in the country assigned to them as a destination. In fact, the pairing between students and host families takes place exclusively on the basis of the availability of the latter and all this gives a touch of suspense and a taste of adventure to the whole experience! 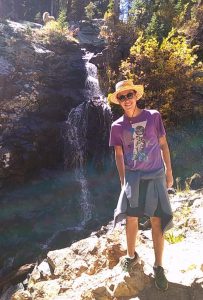 “I ended up in a small village in northern New Mexico: the school is very small and the team I play in isn’t very competitive, but I don’t give up and I keep playing doing my best! Some of my American peers have started only this year, while others have a little more years of experience behind them… Let’s say that, maybe because of the great passion I have, and maybe because I come from the homeland of soccer, I feel a bit like if I were their coach! Think that – he tells me – in a single match I scored 8 goals and I even ended up in the newspaper! “.

“There are some curious differences between football in the US, which they call soccer, and the European one, “our” football. For example the rules: when you get a yellow card you must be substituted, but being the substitutions limitless you can get back on the pitch as many times as you want; then there is the “mercy” rule, so if a team is losing with a difference of 10 goals, during the second half, the match ends.

The game is sometimes a bit slower, even if there are many Mexican native boys (given the proximity to the US) who can play well, and New Mexico is one of the best states in the US for the quality of soccer players.

Trainings are on a daily basis and always after school, the work is quite hard especially from the physical point of view and the technical-tactical part is less regarded than in Italy, but luckily there are a lot of matches! In our country basically we train less but with more quality, and that’s why I believe that I’m a bit ahead of the others. 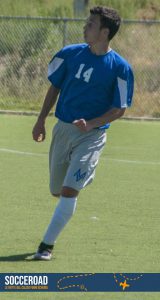 Strange is the absence of locker rooms in all the places where I played, but it’s part of soccer here and what really matters is to be part of this beautiful group which I’m having a wonderful time with! I feel important and perfectly integrated into the team as a leader… This pushes me even more to do my best and give my best in every training and match!

I want to talk shortly about the school system, I have to say that from the educational point of view they are far ahead of us in terms of management, materials and student-professor relationships. The teachers are always kind and available, all the materials are provided by the school (even textbooks!) and in the classroom we have access to interactive multimedia boards, computers and printers”.

So Andrea, are you thinking about your future there?

“If you are talking about the chance of attending an American college, yes I’ll do it! But first I want to go home, graduate and most important… Play soccer!!! We’ll see then”.

Andrea will stay there until June 2019, still many months of adventures in New Mexico are waiting for him…I wish him the best of luck for all his dreams! 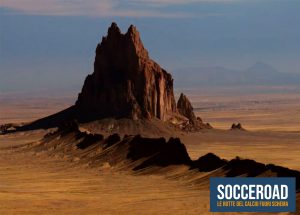 The state is located in the Southwestern region of the U.S.A., right on the border with Mexico. The area is more or less the same as Italy, and it’s among the Rocky Mountain States, also due to the vastness of its canyons like the Rio Grande and deserted and arid mountains like the famous Shiprock. In the north there are forests and snowy areas, with famous skiing resorts. The capital city Santa Fe is very small (about 70k people), much bigger and known is Albuquerque, made famous by the TV series Breaking Bad.