Late-July Sunday, Toronto Pearson Airport. Here is Lucio! We’ve been the Uefa guest-coaches at the International Soccer Camp in London, city with 400k people halfway between Toronto and Detroit…

The event has been organized by my friend Mario (whose story I’ll tell you soon) with the aim of choosing players to showcase in Italy.

And so Lucio, Frosinone youth field’s coach with some experience also in Eccellenza (Italian 5th division), landed for the first time in Canada and for the first time we introduced ourselves and said each other “nice to meet you”. He had a pale and slightly frowning face at the exit of the terminal… With a poor landing first and the terrible immigration office then, his welcome hasn’t been really the best! But then the week full of soccer and different situations made him forget this bad start!

First date: a gala dinner in Windsor (the Canadian Detroit) with Frosinone Calcio; the Serie A team was there for a tournée during that period. 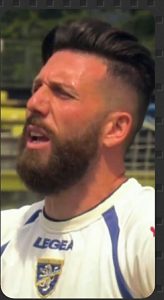 Once at the table, we sat next to Windsor Vice-Consul and to other authorities that today are still unknown to me… For us the important thing was to feel at home talking to the players, the coaches and the managers; then something funny happened: I met my cousin, the team’s storeman, that I didn’t see since a long time and Lucio met for the first time some managers of his club right there in Canada!

Between the first / second and third Ladies hand kissing and the talks in 3 languages (Italian, English and Ciociaro dialect), we witnessed some funny scenes with some members of the Ciociaro Club of Windsor (1800 associates) and the Italian soccer players as protagonists; there have been plenty of bizarre as much as unique moments in their authenticity! An example? The 60 anthems before the dinner that left the players a bit dumbfounded, or the players’ menu, which wasn’t really the best for an athlete… 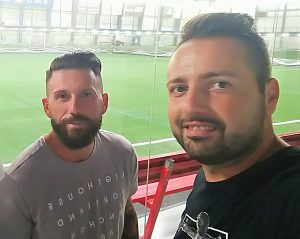 It got late and after saying goodbye to everyone we drove back to London, laughing like teenagers after seeing so many funny things in a night… Very nice evening, but the next morning the Camp started and we had to be ready, otherwise what would Mario say??!!

On the field everything ran smooth and there was right away a surprising professional understanding, like it happens between people used to manage any kind of situation. Lucio is very competent and prepared, and considering his “far from perfect” English he still made his mark despite the troubles coming from the age and the level differences of the players! After 4 days of work we left London direction Toronto, for a dinner in Downtown: everything was ok until a stomach ache put him K.O. and we had to go to my home, in Niagara Falls.

The next morning Lucio was guest of the Empire Academy Niagara, a project that me and Davide Massafra carry on since a couple of years with great satisfaction. Davide deserves an extra mention, or probably even two! Anyway, Lucio got on the field for a short training session with the aim of shooting, it was very interesting! I’m always happy when my kids can try different kinds of work and other methods and ideas of training.

Just the time for a visit to the Niagara Waterfalls and then it was time to bring him to the airport for his flight to Rome, with the promise of meeting again soon! This time around where he lives though.

… As we promised!!! I arrived in Ceprano (Frosinone) a mid-September evening around 7,30 pm and it was already getting dark, and Lucio, in summer clothes (shirt and shorts all in white), brought me to the main square: Ceprano Downtown 🙂 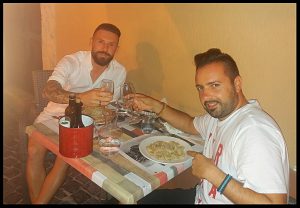 Surely it’s not like the one in Toronto or Detroit, but the air I could breathe there was freeing and relaxing; he basically knows everyone around, from bars and restaurants owners to men who simply wander around… After a well served happy hour we went for dinner in a place nearby. 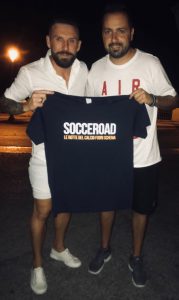 I got a big plate of pasta Cacio e Pepe (also name of the restaurant) that, with a Buffalo Mozzarella before and a good glass of white wine, gave the atmosphere very good vibes

We talked about a lot of things but the main subject was always soccer and its thousand sides: we shifted from epic tales to studies and even philosophy.

The night went by and it was getting late, but I had the pleasure of meeting his family and take some pictures of us with his younger daughter (4 years old) as a photographer, and then it was time for me to go home… But with the knowledge of having created a nice working relationship made of esteem and authenticity, born eight thousand km from Ceprano, but already so good to seem longer than a few months!

Lucio believes in these words, as a pillar of his being a coach. I totally agree with him!

Bye Lucio, keep up the good work and see you soon!

Lucio’s coordinates as a player…

Abruptly ending my career as a soccer player, when Professor Zeppilli found a problem on my aortic valve, I took on sport activities in school, winning 3 medals at the Youth Games in cross-country and relay races… I kept to live for soccer anyway, with all the habits that this sport involves like timetables, nutrition, pre-preparazions, dedication, sacrifice and competition… Mine has been and still is a family of sports people, my brother is a very good soccer player and my sister has been many times Italian dancing champion…

Lucio’s coordinates as a coach…