If you would ask me what to do for Halloween… I’d suggest you a great experience! Why not to go in the Nevada’s desert… Why not to go on a trip to Las Vegas?!

My job as a coach involves a lot of responsibilities, sacrifices and sometimes there’s also a stressful side about it, but I must say that it always gives me the chance to visit new and unique places!

Amog them, there is one that I had the pleasure of seeing for 6 days in a row: Las Vegas! America’s entertaining capital, built from scratch in the middle of the desert, close (or kinda), to Los Angeles and Phoenix, that lie respectively 440 and 480 Km away.

BBuffalo – Las Vegas: direct flight from the closest American city to where I live; the U15 boys team of the Empire Niagara Academy took part to the Major Cup tournament, and me and my colleague and friend Davide were ready to go. The travel has been self-organized by each player according to each one’s family needs, mainly because the travel wasn’t something short: 5 hours flight and 3 hours of time difference!

The name Las Vegas is the translation in spanish for “the meadows”. As a matter of fact, in the area there were water wells that allowed the growth of some green oasis.

We landed in Las Vegas in the evening and already from above it’s easy to see how majestic and unique this place is, nothing can be seen on the horizon except an ocean of lights melting together in the heart of the city. 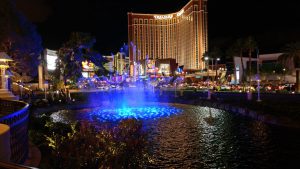 Just the time to open the aircraft door and it was already possible to touch the crazy mood of this casino-city: the airport was full of banners and monitors that showed poker games, and then there were slot-machines everywhere, and when I say everywhere I mean also at the baggage claim, in the toilets, in the hallways, at the check-in desk and even inside cabs!!

The climate was extraordinary, being between October and November, with minimum 18°C and maximum 27°C, and a breeze that was warm for us since we were waiting for the first snow in Canada, so to find ourselves in shorts and flip-flops was a very pleasant feeling… But the best was yet to come and soon the crazy Las Vegas lifestyle would have boomed in all its power! 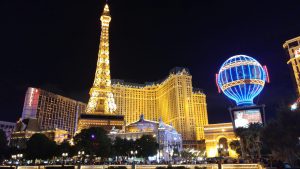 Our Manager, Mark, found us a very nice villa to stay in the residential area, where enormous palms and supercars were the ordinary. Heated pool, cinema and games room, plus six huge rooms to accomodate us and some of our players, there with their families.

We were there, as I said, to take part to one of the most important West Coast soccer tournaments, playing against teams coming from California, Texas and even Mexico; the pitches looked perfect like billiard tables, it was almost a shame to use them to play. The atmosphere was peculiar, it made us feel the uniqueness of the location: the palms surrounding the pitches, the city skyline and the mountains featured in many Hollywood movies, limousines everywhere (almost like city cars for us) rented from tourists for a few bucks, and wild crowds at every corner, dressed in a singular and bizarre way… An endless blend of details, colours and voices that mix in front of us filling our ears and our mind. 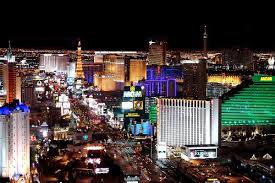 Very fascinating was the Las Vegas “Strip”, the main artery of the city which hosts the best hotels and casinos, with music 24/7 played through speakers scattered around on sidewalks, attached to street lights and even hidden into hedges! But Las Vegas is not only this: with a 40 minutes drive it’s possible to reach canyons and towering mountains with amazing combinations of colours… Impossible to compare the rest with this! That was the ‘Valley of Fire State Park’, right in the middle of the desert.

But let’s get back to the tournament  Sparkling first match, in the evening, against the home team of Downtown Las Vegas FC; as any other match that we play in the West Coast, we always find ourselves in the group with the favoured team, so the one with the highest ranking, or in the group with the home team… The reason? Very easy! Being from Canada but playing in the USA, the idea that they have of us is that of a ‘soft team’, one that it’s easy to win against… The result? We won 2-1  so we defeated the sponsoring team of the tournament, causing the anger (not only a bit!) of the organizers and at the same time the curiosity of the insiders; considering that we got on the field only 4 hours after we landed, with the time difference to absorb and a very early start in the morning… 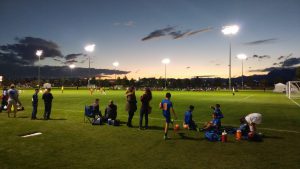 It was a great undertaking! Surprisingly, with 2 wins and 1 draw, we qualified for the semi-finals. With a very limited short-list in order to stay within travel budget (only 14 players!) and playing 3 matches in 2 days, we arrived to the two most important matches a bit short on energy. The semi-final was a sports battle that we managed to win, despite the loss of 3 players for injury… Time for the final the day after, against the fearsome Mexican team!!!

And it was then that unluckily our dream got shattered, contributing factor a ghost goal awarded to our opponents (with the VAR for sure it wouldn’t have been goal ). Nevertheless we achieved the great result of being able to get on the second step of the prestigious Las Vegas podium, capturing this unforgettable experience in the heart and in the memories of the boys and (why not?!) also in mines! 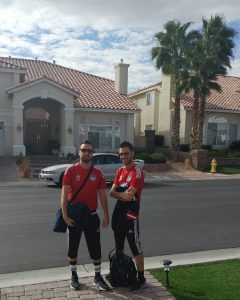 Getting to the ‘fun’ side of the travel, being in the Sin City I couldn’t say no to three nights of wandering around the Strip, feeling like in Ocean’s Eleven or in The Hangover… You must have watched at least one! People there gamble at every corner: at restaurants tables, in clubs toilets, in hotels hallways… Huge casinos offer concerts instead of gala events, and it’s not hard to meet actors and stars at the Caesars Palace or at the Bellagio Towers. Coloured fountains spray water in a scenographic way, people sing around at any time of the night, losing completely track of time… Maybe that’s why there are no clocks in the whole city!

Feeling almost obliged to pay a visit to a casino, me and my colleague Davide drove quite long to place a few bets at the roulette table of the Venetian Hotel! It’s known for being the American version of Venice, with the gondola trips into the ‘Canal Grande’ or under the Rialto Bridge, the walks through San Marco Square… It made us breathe a familiar air that was very welcome!

Like in Hollywood movies, also there appeared nice girls ready to forge a new friendship that would probably get tighter if the luck at the table was on our side… Well, in our case it wasn’t, but no worries! There was the “losers bar” ready to welcome us. So we sat at that counter thinking that it would be like all the others… But it wasn’t! A man with a cowboy hat was draining his glass of whiskey, then he had one more, and then one more…

After a couple of minutes we got served two of them, on the rocks, right in front of us… The cowboy offered us a round, getting that we weren’t very expert gamblers and that maybe, like him, we were desperate having lost everything! We couldn’t disappoint him, so we toasted to those 150 dollars gone up in smoke  We would have rather toasted to the victory, maybe with a nice female company… But we can’t get all in life!

Finally, this magical experience ended with a very positive outcome!

A really good 2nd place at the tournament, great result for being the first tournament for the Canadian Academy, and then the fantastic feeling of having played the role of the lucky tourist, visiting a world so unique in its kind, especially during Halloween when everyone, from croupiers to airport hostesses, wants to have the most bizarre costume… It’s been a “Hangover”… a little one  Able to make me think about Las Vegas with great emotion!!!